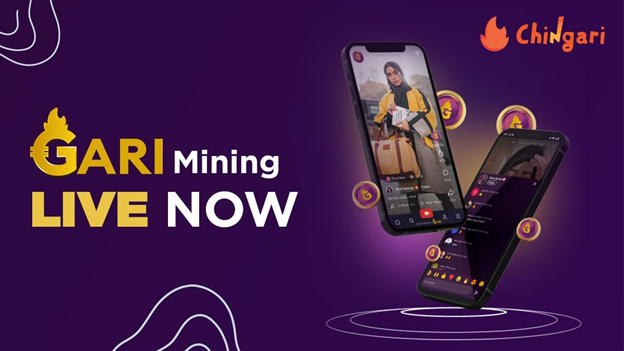 With GARI Mining, Chingari delivers on its promise to democratize the creator economy

The idea of ​​play to win video games has already caught on, and now Chingari is trying to extend the concept to the world of social media with the launch of its new Engage to Win and Create. -to-earn” template for content creators.

Chingari may not be the most household name in the social media world, but that could change with the launch of its new GARI Mining program today, which allows users to earn cryptocurrency every day. to interact with the app. It’s already a huge name in its home country of India, where it ranks among the most downloaded apps in the country, ahead of Instagram, Facebook and others. It currently has over five million daily active users and 40 million monthly active users, each of which can now increase its earning potential.

With Chingari’s GARI Mining program, app users can now earn rewards paid in GARI tokens for creating new content, watching videos, hitting the like button, sharing content and Moreover. Chingari said it would pay out $12 million each year in rewards to users, based on the current price in US dollars. Every day it will create a pool of 50,000 GARI, with 5,000 reserved as a daily login bonus and the rest going to those who interact with the app in other ways.

In addition, users will be able to use the GARI tokens they earn to buy NFT GARI badges which will allow them to multiply their earnings. Chingari said it offers five types of badges, ranging from basic, bronze, silver, gold and diamond, which will increase their revenue tenfold.

The launch of the program is the latest step in Chingari’s carefully considered plan to bring its popular video-sharing app into crypto. From the start, Chingari’s goal has been to create a more democratized creator economy that allows each of its users to get something out of the app.

Chingari launched the GARI token to much fanfare last year, notably securing its brand ambassador, the superstar Bollywood actor Salman Khan, on board to promote it. This helped him raise an impressive $16 million through an IDO last December. Since then, Chingari has integrated a wallet into its app and onboarded over 600,000 users.

According to Chingari CEO Sumit Ghosh, GARI rewards will help creators reduce their reliance on sponsored posts as the only viable source of income. With platforms such as YouTube and Instagram, most users only receive a very small share of the advertising revenue generated by their content, which forces them to advertise branded products to generate more revenue.

“It gives us immense pleasure to announce the GARI Mining program,” Ghosh said. “We promised to democratize the creator economy when we launched Chingari a few years ago and GARI Mining is at the forefront of this process. This program will ensure a level playing field for creators great and humble. . »