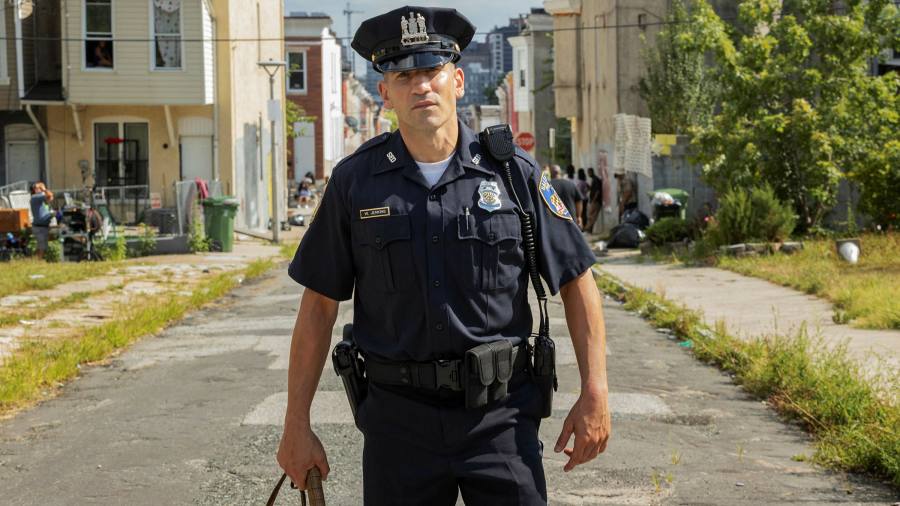 “There is no stronger dictatorship in America than a beaten cop.” This line from David Simon’s brilliant and murderous new drama We own this town, about police brutality and corruption, is as strong an indictment of systemic failures in American law enforcement as you will hear. Except, chillingly, it’s not an indictment at all, but vindication and celebration, an officer’s reminder to his rookie partner that he’s free to use violence with impunity.

Simon, creator of Thread, returns to Baltimore, after Treme, The devil and The Plot Against America, to piece together the fragments of a broken city and turn them into an exquisite television mosaic. The new show, co-created and with Simon’s frequent collaborator George Pelecanos, has the same sharp writing and taut line as its predecessor, but where Thread has repeatedly been called romance, full of rich, literary characters, this six-part miniseries feels more like hard-hitting, urgent reporting. It is, after all, based on a book by Baltimore Sun investigative reporter Justin Fenton.

The story largely revolves around a single department of the BDP, the Gun Trace Task Force, which serves as a microcosm for the increasingly thin blue line in policing in Baltimore and the larger United States. widely. In March 2017, the eight members were charged with racketeering and later convicted of stealing up to $200,000 by accosting and intimidating citizens. So much for “a few rotten apples” – here’s a whole rotten bushel.

The show jumps between FBI interviews with the accused, years of investigation, and flashbacks revealing this cadre’s background as opportunists, gang-affiliated, bullies, and racists. We first meet the leader, Sgt Wayne Jenkins (Jon Bernthal, believable as the crazy-eyed wire) as he tells his trainees, “Fuck any talk of police brutality – if we lose the fight, we lose the street.” Meanwhile, for Daniel Hersl (John Charles), an officer with 50 complaints against him for excessive use of force, “cops who don’t get complaints don’t make the police.” In one of many heartbreaking scenes, we see him beat unconscious an unarmed black suspect who has been arrested on an arbitrary and fabricated charge.

So who controls the police? While a large part of We own this town leaves us oscillating between fury and disbelief, there are a few characters who restore our dwindling faith in those meant to protect us. Two regional narcotics investigators, David McDougall (David Corenswet) and Scott Kilpatrick (Larry Mitchell), trade light banter while fighting the good fight against a gang that turns out to be linked to their colleagues. But the heart of the show belongs to civil rights lawyer Nicole Steele (Wunmi Mosaku), who has been tasked with “fixing things” after an African-American man, Freddie Gray, is killed by police. in 2015.

Every time one of his calls for meaningful review and change is met with fatalism from everyone from the mayor to the police commissioner, you half expect him to be told “forget it, Nicole, it’s Baltimore.” But she won’t. And David Simon either.