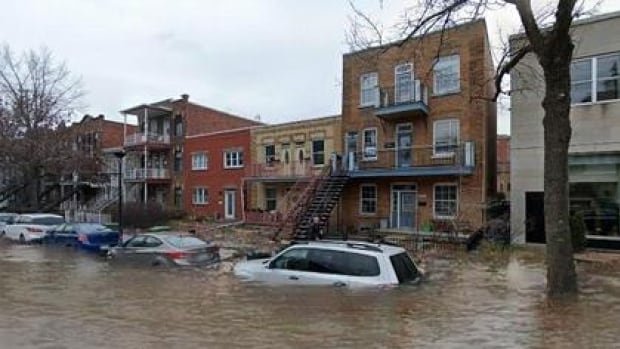 Have you ever wondered what your home might look like in a flood? How about your favorite restaurant covered in thick smog or the beloved Montreal Bell Center surrounded by an orange sky?

These views can all be generated on a website launched Thursday that uses artificial intelligence (AI) to simulate what almost any place on Earth would look like in different catastrophic scenarios caused by climate change.

The website, thisclimatedoesnotexist.com, applies realistic filters describing flood, wildfire, or smog to any address available through Google Street View. It is intended to make users aware of future scenarios if the global response to climate change continues to be insufficient.

Yoshua Bengio, scientific director and founder of the Montreal AI Institute Mila, which created the site, says the project is not a climate modeling projection. Rather, it aims to strengthen people’s empathy – and subsequently, their actions – by making the impacts of climate change more personal.

“If I tell you about something really serious that is going on far away from you and I tell it to you with graphs and equations … it doesn’t affect you much and it doesn’t become a priority for you,” he said. -he declares.

The AI ​​expert and professor at the University of Montreal says he came up with the concept for the site when he noticed that the company had all the tools to fight climate change, but no one was taking action.

“Most people understand there is a problem, but they have more urgent things in their life,” he said.

Studies show that people take climate change more seriously when shown pictures rather than text. If the footage is about people’s homes, or something they can relate to, they take it even more seriously, Bengio said.

He says that for the planet to tackle the climate crisis, everyone must act as if their home is directly affected.

The project is the culmination of two years of work and collaboration between AI researchers, as well as experts in human behavior and environmental sciences.

Built with technological contributions from the National Geographic Society, Microsoft, BCG Gamma and Borealis AI, the site strives to put people in the shoes of those who are currently suffering the impacts of climate change, such as the inhabitants of the British Columbia, and highlight what can be done about it.

“If we were just showing people something depressing it wouldn’t be that great,” Bengio said.

An important part of the website, he said, teaches people how they can turn the negative energy generated by images into positive action.

“The most important action is collective because the change will come mainly from the government,” he said.

But changing personal habits such as the way you eat, where you move, the type of energy source used in your home, are important steps. Writing to representatives and participating in climate change events and walks are also helpful, Bengio said.

“We hope that this [project] will motivate people to take action to prevent worst-case scenarios from happening. ”