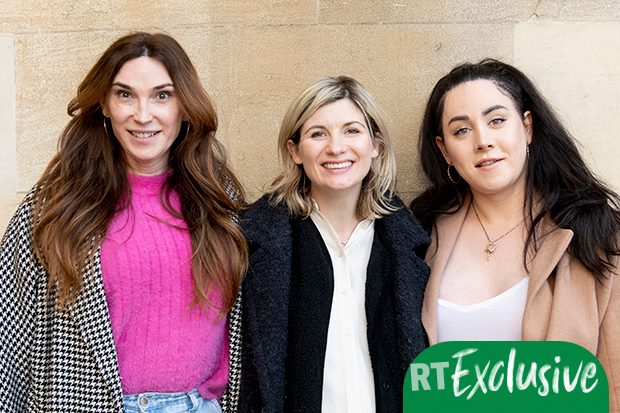 We caught up with screenwriter, series creator, and author Juno Dawson to learn more about the series’ origins, how returning showrunner Russell T Davies contributed, and what we can expect for the next seven episodes. . Plus, bonus LINDA content for all LINDA fans.

Hey Juno – from your perspective, how did the Doctor Who: Redacted story begin?

It’s been 84 years… He really has. I was approached by the lovely Ella Watts of BBC Sounds in the middle of 2019. I’ll be the first to admit it: I was like, ‘I don’t get it.’ Even though I had already written for Big Finish audio on the Torchwood line, I thought to myself: “A podcast, but a script? I do not understand.”

And I thought, “What if there were these three girls who like conspiracy theories, and they kind of recorded that something weird is going on with that blue box, and there’s has this legend of the Doctor, but how far are they? ”

So it’s been in the works for a while?

Well, we recorded the pilot in January 2020 and, of course, we knew Doctor Who: Redacted involved some sort of viral threat. In January 2020, we were all saying to ourselves, “This is relevant. Snatched from the headlines. Ooh, COVID – that’s a good job that’s not in our country. And then, of course, he completely stopped everything. I thought that was going to be the end of the project.

And then, well, a year and a half later, almost out of nowhere, I got this email saying, “We have the green light. That happens. PS We need the scripts tomorrow.

And so it went from kind of a period of huge inactivity to an absolute mad dash in order to get it ready for the Easter special. The preparation for April was long.

What was the original pitch the BBC gave you?

There was a very strong belief that they shouldn’t do, I guess, the expected thing – which is, after the TV episodes, to have a group of fans and a recognizable face from the BBC just dissecting the episode.

They knew it was a bad idea because there were so many fan podcasts doing that. So, I felt like saying, “This is the official Doctor Who podcast” was actually quite disrespectful.

But BBC Sounds wanted an official Doctor Who podcast. Doctor Who didn’t exist in this space before. Ella’s background is overwhelmingly in audio drama, and she felt there was a space for that type of podcasting in a podcast.

There’s a long history of Doctor Who characters as riffs on Doctor Who fans, isn’t there? Like LINDA from Love & Monsters, and Clive from Rose…

Yes, we said early on that if Russell T Davies brought Doctor Who back now with this episode, Clive would have had a podcast. 100 per cent. And maybe LINDA too.

There was a very, very brief discussion about whether we went back to LINDA and did the official LINDA podcast. But that would have required a lot more intervention from Russell, and it’s obvious he has his hands full. He’s a busy man. So we went our own way.

Also, you want to give her something new. Although there are a lot of easter eggs and many references to Doctor Who’s past – Shawna, Abby and Cleo and their lives, they are 100% my invention. This is also what interests me as a creator.

That said, there are plenty of returning characters – Kate Stewart, Rani, and Jodie Whittaker’s Doctor to name a few.

Yes, obviously, so far on the podcast you have heard of Anjli [Mohindra], and you heard about Jodie. There are many more cameos to come. And each of them was so professional, and how they’re able to slip into those old roles was a really joyful thing.

Do you have a wishlist for the characters?

Now there is a question! We had a big, long list. I will say, Russell… There were characters that we weren’t allowed to use. That’s all I will say. And maybe Russell has reasons for that. That’s all I’m going to say.

In fact, I don’t know. Even I don’t know the answer to that. We were just told no in some cases.

For me, the dealbreaker was whether or not we were going to get the Doctor. And I wanted Jodie. I would have been devastated if we hadn’t. And, of course, by the time we got to taping, Jodie had finished her final episode of Doctor Who. So we were kind of like, “We’re basically calling a retired doctor, to come back.”

And thank goodness she was really up for it. She didn’t even hesitate. It was just a big, old yes. You know, the day she arrived was, I think, the best day of my career so far.

We mentioned Big Finish – you’ve written for them before, and they’re the face of the Doctor Who audio drama. What makes Redacted different?

Initially, there was a conversation about stepping on Big Finish’s toes. I love the Big Finish guys. I worked for them. They are adorable. I mean, in some ways, those were my first screenplay commissions.

So there were conversations about how to make it different. At one point we were going to use sections of interviews with real people and real experts. So if the girls from Blue Box Files had studied spiders in Sheffield, we would have brought in some sort of real-life arachnid scientist.

And then we were like, ‘We’re making this so complicated.’ Audio drama is a big and wide world. Our episodes are shorter – 20, 25 minute bits, whereas with Big Finish, you know, you’re sitting down to listen to a big hour-long episode.

Also, I wanted them to be path length. And the journey in this country tends to be around 25 minutes.

This, again, took me back to episodes from the 1980s – like the last time Doctor Who was 25 minutes long.

We’ve had three episodes now, and things are getting more sci-fi as our heroes find that people are forgetting about the Doctor – what can we expect from the next seven episodes?

There are some flip-flops. I will say that episode 4 and episode 7 represent unusual turns.

So we’re one step ahead of Cleo, Abby, and Shawna, in that we know who the Doctor is and we know what the TARDIS is. So you don’t want them to be like for 10 weeks, “What could this be? Oh my God. Maybe they are aliens. “Not at all. Extraterrestrials don’t exist.

Because it becomes a bit like the Lois Lane syndrome, that is to say: it’s Superman! We can all see it’s Superman. Abby, Shawna, and Cleo, in their own way, are very smart and very resourceful. So we couldn’t let them dither for 10 weeks, talking about old Doctor Who adventures.

I would say: keep your eyes peeled for episode 4 and episode 7, where actually everything takes a bit of a quibble, and you go in a bit of a different direction.

And then the last three episodes, I will say, are almost an action sequence told in three parts.

After that, will the story be concluded or could we see more of it from Redacted? Or maybe another podcast story?

There’s room to tell more stories, and I think that’s something that Russell really understands too, is that there’s now a Whoniverse. From Doctor Who, we had Torchwood, we had Sarah Jane, we had Class. There’s always room for storytelling in this neighborhood, because you’re looking at a neighborhood that transcends time and space. There are so many more stories you can tell.

Charlie Craggs is a very good friend of mine. I know she really wants to play Cleo again. So it would be nice to see Cleo Proctor return for more adventures.

On the record, I would say to Russell T Davies: If you wish to use any of the redacted characters, I give you my blessing. You are welcome at their home. Hire Charlie Craggs. Keep Charlie Craggs at work, that’s what I say to that.

You’ve been a lifelong fan, and you’ve already almost written for a spin-off in Season 2 of Class – how does it feel to finally have your Doctor Who spin-off?

It’s like Brokeback Mountain. Why can’t I leave you, Doctor Who? It’s because I’m a fan. He was my first love. You know, I remember the Sylvester McCoy era very well, and then I massively got into it in the 90s, when I had no friends. I bought them on VHS, and Doctor Who was my friend.

When the call comes, when the Bat signal comes, I’m never going to refuse it. Even if sometimes I don’t have the time and the space to do things.

I did Big Finish. I did the novel, The Good Doctor. And when Ella came to see me, I really had my plate full. But I was like, “It’s Doctor Who. If you in your 30s went back and said to your 13-year-old, ‘You just turned down the opportunity to write Doctor Who,’ I, at 13, would just be inconsolable.”

So I’m never going to not answer the call, basically.

This interview has been edited and condensed.

Doctor Who: Redacted releases new episodes on BBC Sounds on Sundays. For more, check out our science fiction page or our full TV guide.

The latest issue of Radio Times magazine is on sale nouch – subscribe now and get the next 12 issues for just £1. For more on TV’s biggest stars, listen to the RadioTimes Podcast mindhJane Garvey.

2022-05-01
Previous Post: Creator wants a new app to bring people together | national news
Next Post: Political doodle shared by Elon Musk is now being sold by creator as NFT: report